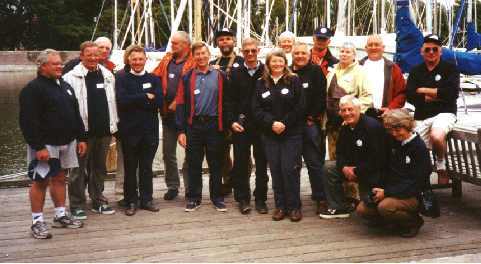 The 18th International Friendship Rally was organised by the Kring van Vega Zeilers (the Dutch Vega Club) at Hoorn on the Isselmeer between the 17th and the 22nd July 2000.

Over sixty Vegas from all over Europe attended and the crews were even more international.
‘Dizzy Daisy’, ‘Toria II’ and ‘Bugle’ from the Medway, ‘Scandi’ and ‘Jenavive’ from the East Coast and ‘Southern Comfort’ with support from non Vega ‘Rozema’ from the Solent made up the UK contingent, making us the second largest national grouping after our Dutch hosts. We included in our crews Lars Lemby from Sweden, Cai Christiansen? from Denmark and Ross Dring from the USA.

The International Friendship part of the rally was already well underway.
Several of the boats met up in Ijmuiden, after some lively crossings, thankfully with following winds, and proceeded in company up to Amsterdam where we met others of our party. On the Sunday before the rally started we sailed to Hoorn and rendezvoused outside so we could enter the Yacht Club harbour together. When we arrived many of the host nation were already there and made us most welcome. Some wives had decided that Stena ferries are better than Vegas when it comes to North Sea crossings and joined us in Hoorn.

The rally proper opened on the Monday with the Vega flag and the flags of all the participating nations being raised together.
Old friendships, forged at previous rallies, were renewed and strengthened.
On Wednesday we started the racing, two races each for the Racing class of 8 boats and the cruising class of 34 boats. The wind was force four plus and some lively racing took place. The following day we raced twice again but this time in force three with lots of sunshine. The results show that ‘Bugle’ did very well with a third place in the cruising class with the rest of us spread though the fleet. Considering how rarely the Vegas race in the UK it was an excellent result. The prize giving was held in the historic North Church at Hoorn and we were entertained by the Amsterdam Male Voice Choir.

On the Friday the British contingent were major contributors to the Dinghy/Tender race. The ladies team of Di Webb, Veronica Freeman and Julia Neesam, looked most fetching in their ‘Rochester Recycling’ dustbin liners as they tried, in vain, to stay dry.
Unlike their male counterparts they actually won a prize, I think for the Concourse D’Elegance.
The men’s team of Mike Freeman, Steve Birch, John Vaughan, Ross Dring, Tom Sutton and Mike Smith must have set a new record for weight carried in a nine-foot inflatable. At the start some one compared them to a Maori War Canoe, by the end of the course the resemblance was to a submarine. Noble efforts were made to scupper the opposition by all means possible if not legal.
They did at least manage drag several of the opposition into the water with them.

The closing dinner was held in the Club House and speakers from the national associations paid tribute to the Dutch Club for its organisation and hospitality. The one recurring theme was the very real sense of friendship across all the nationalities and groups there. It was with some sadness that the rally broke up on Saturday, with many promises to meet again at the next rally in 2002 in Denmark.

On the way home several of the British boats decided to head south through the Dutch Canal System, ‘Scandi’ and ‘Jenavive’ leaving by Stellendam for the East Coast, and ‘Southern Comfort’, ‘Dizzy Daisy’ and ‘Rozema’ heading for Vlissingen. ‘Bugle’ and ‘Toria II’ had already departed for Ijmuiden and the direct route home. 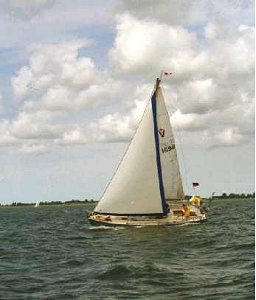 Bugle powering to 3rd in the Cruising Class

The 18th International Friendship Rally benefited from a very keen and well fought racing regatta.
There were two classes, Racing and Cruising. The races were held over two days with two races on each day. All four races were included for the final positions in each class but each Vega was able to discard one race. The wind was NW on the first day and rose to F6 which caused a few uplifting moments. The second day proved to be much calmer with F3, again NW being the norm.The seas were still a little bumpy for the first race but the wind, sun and sea proved a great backdrop for some fantastic racing in both classes.
Luckily Southern Comfort stayed at the back of the fleet (on both days) to take some fantastic pictures of the whole fleet on a run (that’s my excuse and I am sticking to it!!!).